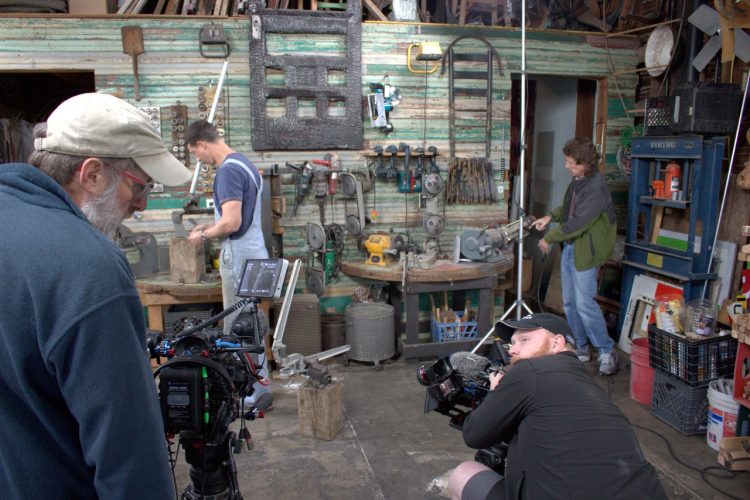 About 8 months ago I was called by a TV show: Handcrafted America.

A little embarrassed, because i don’t own or watch TV, I coyly entertained a conversation about featuring me in one of their episodes. I warmed up during the interview getting a strong sense that the interviewer was very intelligent, enjoyable to talk to, and serious about filming me working in the studio.

One thing led to another over the following weeks and early one morning, in late February 2017, there’s a knock on my studio door.

Waiting outside was an entire crew of cameramen, sound guys, lighting rigs and personnel, and the producer of the show.

I’ve got a decent sized work space but not big enough to comfortably accommodate 8 + people AND all their gear. After 2 solid days of filming, a 12 hour day and a 14 hour day, we wrapped things up. I was left with a residual of, “what the hell just happened?”

Not in a bad way. One of those bizarre encounters where you don’t know whether it really occurred or not . . . very dream like. Over the next few weeks after the shoot i was inadvertently offered little reminders of their passing through my world. They use something called “gaffer’s tape”, a matte black cloth tape, to cover all the manufacturer’s logos on the equipment I use. . .drivers, drills, presses, shears, saws. Everything! It was very subtle but apparent enough that i would notice the strange difference in my tools while working. . . “oh yeah, the lighting and camera guys did all that… pretty funny” I’d say to myself while I peeled the black tape off the logo.

The episode is being aired on Friday, August 18 @ 8:30pm EST (Eastern Standard Time).